Start your New Year with a bang by winning a £150 discount voucher for your next holiday! Enter our Instagram #BlastFromPastClick contest by simply following us on Instagram and posting your best Festive Season picture from the yesteryears. The picture can be of anything that best reflects the fun and spirit of the Holidays. It could be you posing with a Santa or you partying with your friends. Only posts with #BlastFromPastClick in the caption will be eligible for this contest. 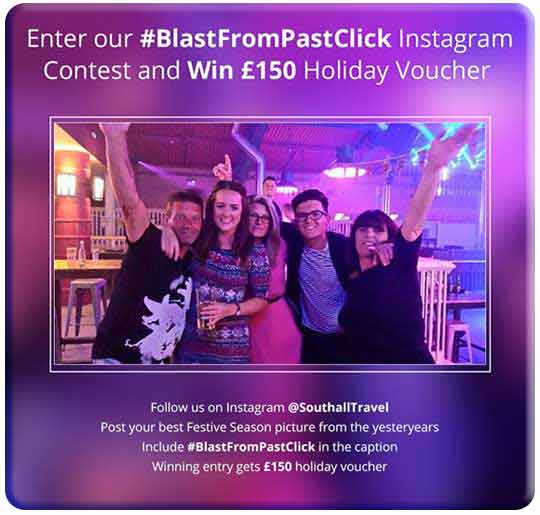 Read on to know the competition rules.

Eligibility to Enter the Competition:

The Competition is open only to the residents of the United Kingdom (UK) who:

How to Enter the Competition:

When you are following @southalltravel , you will be able to enter the Competition in below 2 steps:

This is not a chance-based or lucky-draw Competition and the winning entry will only be judged based on the above criteria. The Competition is void where prohibited by law. The Sponsor obtains exclusive ownership rights to your entry. By entering the Competition, you (“entrant” or “you”) agree to these official rules.

No Purchase is required to enter the Competition.

Multiple entries are not allowed. The Sponsor reserves the right to reject any Entry for any reason and without notice to the participant.

You agree to the following by submitting an entry:

That the Entry and each individual component thereof – including but not restricted to the photo, caption etc complies with the terms/rules of the Competition. When you enter the Competition and make the entry, you consent to share your Entry including without limitation all information and components including the photo. You agree that the Sponsor and other the released parties bear no liability whatsoever regarding the use of your Entry or any component thereof by anyone. You also agree to hold the Sponsor and the released parties absolutely harmless in the event it is subsequently discovered that you have departed from or not fully complied with any of the terms of the Competition.

By participating in the Competition, each participant hereby warrants and represents that any Entry/Post (including but not limited to the Photo) he/she submits is original to him/her and that he/she has the right to use the post to enter the Competition; is not in violation of any kind of law, ordinance, statute or regulation; will not give rise to any claims whatsoever, including, without limitation, claims of infringement, intellectual property, invasion of privacy or publicity, or infringe on any rights and/or interests of any 3rd party; and is not defamatory, trade libellous, pornographic or obscene, and further that it will not contain, depict, include, discuss or involve, without limitation, any of the following: nudity; alcohol/drug consumption or smoking; explicit or graphic sexual activity, or sexual innuendo; crude, vulgar or offensive language and/or symbols; derogatory characterizations of any ethnic, racial, sexual, religious or other groups (including, without limitation, any competitors of Sponsor); personal information of individuals, including, without limitation, names, telephone numbers and addresses (physical or electronic); commercial messages, comparisons or solicitations for products or services other than products of Sponsor; any identifiable third party products, trade-marks, brands and/or logos, other than those of Sponsor); conduct or other activities in violation of these Rules; and/or any other comment that is or could be considered inappropriate, unsuitable or offensive, all as determined by the Sponsor in its sole and absolute discretion.

Released Parties (as defined below) are not responsible for lost, late, stolen, damaged, incomplete, invalid, un-intelligible, garbled, delayed or misdirected Entries; all of which will be void.

License: By entering the Competition and submitting a Post, each entrant:

(i) without limiting the Instagram Rules grants to the Sponsor, in perpetuity, a non-exclusive license to publish, display, reproduce, modify, edit or otherwise use his/her Post (and each component thereof), in whole or in part, for advertising or promoting the Competition or for any other reason;

(ii) waives all moral rights in and to his/her Post (and each component thereof) in favour of the Sponsor; and

(iii) agrees to release and hold harmless the Released Parties from and against any and all claims, damages, liabilities, costs, and expenses arising from use of his/her Post, including, without limitation, any claim based on publicity rights, defamation, invasion of privacy, copyright infringement, trade-mark infringement or any other intellectual property related or other cause of action whatsoever. For greater certainty and the avoidance of any doubt, the Sponsor reserves the right, in its sole and absolute discretion and at any time, to disqualify any Post if a complaint is received with respect to the Post, or for any other reason. If such an action is necessary at any point during or after the Competition, then the Sponsor reserves the right, in its sole discretion, to take whatever action it deems necessary based on the circumstances – including, without limitation, disqualifying the Post (and therefore the corresponding Entry and/or the associated entrant). Posts will NOT be judged.

Competition Judging: At the end of the Competition, all valid entries will be judged by the Sponsor on the criteria of the Competition and originality of the entrant’s Entry. The valid Entry that best displays “the most exciting moment on your holiday”, as judged by the Sponsor, will be deemed the winner. There will be only one (1) winner. There will be no re-judging.

The Sponsor or its designated representative will make a minimum of three (3) attempts to contact each selected entrant (using Instagram Account used to submit the corresponding selected Entry) within five (5) business days of the winner selection date. If a selected entrant cannot be contacted within five (5) business days of the winner selection date, or if there is a return of any notification as undeliverable; then he/she may, in the sole and absolute discretion of the Sponsor, be disqualified (and, if disqualified, will forfeit all rights to a Prize) and the Sponsor reserves the right, in its sole and absolute discretion and time permitting, to randomly select an alternate eligible entrant from among the remaining eligible Entries submitted and received in accordance with these Rules during the Competition Period (in which case the foregoing provisions of this section shall apply to such newly selected entrant).

Before being declared a confirmed prize winner, each selected entrant may be required at the sole and absolute discretion of the Sponsor to sign and return within ten (10) business days of notification the Sponsor’s declaration and release form, which (among other things):

(i) confirms compliance with these Rules;

(ii) acknowledges acceptance of the Prize (as awarded);

(iii) releases the Released Parties from any and all liability in connection with this Competition, his/her participation therein and/or the awarding and use/misuse of the Prize or any portion thereof; and

(iv) agrees to the publication, reproduction and/or other use of his/her name, address, voice, statements about the Competition and/or photograph or other likeness without further notice or compensation, in any publicity or advertisement carried out by or on behalf of the Sponsor in any manner or medium whatsoever, including print, broadcast or the internet. If a selected entrant (a) fails to return the properly executed Competition documents within the specified time; (b) cannot accept (or is unwilling to accept) the Prize (as awarded) for any reason; and/or (c) is determined to be in violation of these Rules (all as determined by the Sponsor in its sole and absolute discretion); then he/she may, in the sole and absolute discretion of the Sponsor, be disqualified (and, if disqualified, will forfeit all rights to the Prize) and the Sponsor reserves the right, in its sole and absolute discretion and time permitting, to randomly select an alternate eligible entrant from among the remaining eligible Entries submitted and received in accordance with these Rules during the Competition Period (in which case the foregoing provisions of this section shall apply to such newly selected entrant).

All Entry materials become the property of the Sponsor. This Competition is subject to all applicable federal, provincial and municipal laws. The decisions of the Sponsor with respect to all aspects of this Competition are final and binding on all entrants without right of appeal, including, without limitation, any decisions regarding the eligibility/disqualification of Entries and/or entrants. By participating in this Competition, you are agreeing to be legally bound by the terms and conditions of these Rules. Anyone determined to be in violation of these rules for any reason is subject to disqualification in the sole and absolute discretion of the sponsor at any time.

The Released Parties will not be liable for:

(i) any failure of any website or platform during the Competition;

(iii) the failure of any Entry, Post or other information to be received, captured or recorded for any reason, including, but not limited to, technical problems or traffic congestion on the internet or at any website;

(iv) any injury or damage to an entrant’s or any other person’s computer or other device related to or resulting from participating in the Competition; and/or

(v) any combination of the above.

When you enter the Competition, you wilfully accept to provide your information to the Sponsor. By entering this Competition, each entrant expressly consents to the Sponsor, its agents and/or representatives storing, sharing and using any personal information submitted and/or associated with his/her Entry only for the purpose of administering the Competition. This section does not limit any other consent(s) that an individual may provide the Sponsor or others in relation to the collection, use and/or disclosure of their personal information.

The Sponsor reserves the right to adjust any of the dates, timeframes and/or other Competition mechanics stipulated in these Rules, to the extent necessary, for purposes of verifying compliance by any entrant or Entry with these Rules, or as a result of any technical or other problems, or in light of any other circumstances which, in the opinion of the Sponsor, in its sole and absolute discretion, affect the proper administration of the Competition as contemplated in these Rules, or for any other reason.

Released Parties and Limits of Liability: By entering into the Competition, you agree to release and hold harmless the “Released Parties” including without limitation the Sponsor, its respective parent company, subsidiaries, affiliates, and each of their respective employees, staff, officers, directors, and agents from and against any claim or cause of action arising out of participation in the Competition or receipt or use of any prize, including, but not limited to the following