Ho Chi Minh City in Vietnam remains known for its spiritual shrines, its bustling markets, its tall skyscrapers, its pulsating vibe and its maddening crowds. And if you want to discover it all, take our guide and visit these top five places in Ho Chi Minh City.

War Remnants Museum is where you can find memorabilia from the war between America and Vietnam. From US armoured vehicles, artillery pieces, bombs to infantry weapons, horrific photographs of those affected during the US bombings; the museum has on display many reminders of mass massacres, highlighting all too prominently the ill effects of a war on a country. Don’t forget to visit the Requiem Exhibition, displaying a collection of photographs clicked by war photographers who lost their lives in the war. 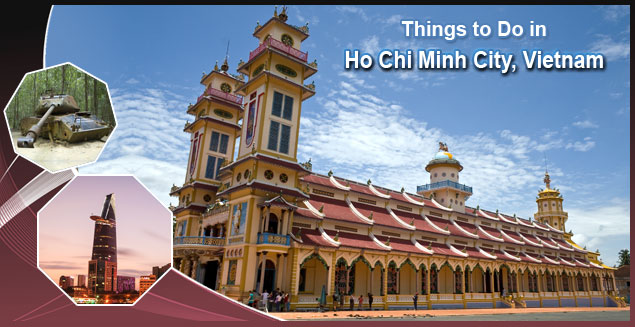 If you haven’t heard of the Cao Dai faith, you’ll be impressed even more at the Cao Dai Temple. Borrowing elements from Buddhism, Christianity, Islam, Taoism and Confucianism, the Cao Dai Temple looks like a Christian Cathedral, complete with aisles and an altar. You will discover that all visitors are required to wear long, white robes to enter the temple premises whereas the priests wear yellow, blue or red robes. A visit to Cao Dai Temple is going to be one of the most interesting experiences as well as discoveries for tourists from the UK.

One of the holiest shrines in Vietnam, Jade Emperor Pagoda is a tourist favourite in the city. A visit to the Pagoda and you will know why. The God of the Heavens resides here as does the God of Hell and the temple has elaborate graphic representations depicting what awaits those entering their respective realms. There’s also the goddess of fertility who bestows the blessing of a child on the childless couples and the goddess of mercy who forgives the sinners. The faith of the devotees as well as the smell of flowers and incense leave many a visitors overwhelmed at the Jade Emperor Pagoda.

Watch the city and its skyscrapers from the neck-bending height of 262 metres at the Bitexco Tower and Sky Deck, located in the business district of Vietnam. Brainchild of the American architect Carlos Zapata, the 68-storey tower has many restaurants, offices as well as shops. For mesmerising views of the city at night, visitors can take the elevator to the 49th floor where there is a public observation deck, 50th and 51st floor lined with restaurants or the Sky Deck, which also hosts local art exhibitions.

The central market in the Cho Lon district of the Ho Chi Minh City, the Binh Tay Market is a great place for an interaction with local culture of the city as well as meeting with locals. The clock tower remains a distinguishable piece of architecture in this wholesale market that also has central courtyard and gardens. The wholesale market sells everything from food to clothing to wedding supplies to fishing gear in its narrow alleyways that remain visited by tonnes of tourists as well as locals on any given day. To know more about the history of this market (yes, there is one), we suggest that you book yourself on one of the many guided tours to the Binh Tay Market.

Many of the flights and flight-inclusive holidays on this website are financially protected by the ATOL scheme. But ATOL protection does not apply to all holiday and travel services listed on this website. Please ask us to confirm what protection may apply to your booking. If you do not receive an ATOL Certificate then the booking will not be ATOL protected. If you do receive an ATOL Certificate but all the parts of your trip are not listed on it, those parts will not be ATOL protected. If you have booked a flight only where the ticket is not issued immediately, your flight will be protected under our ATOL. Please see our booking conditions for information, or for more information about financial protection and the ATOL Certificate go to www.atol.org.uk/ATOLCertificate