Pakistan has been ruled by many dynasties that have left their imprints on the country in the form of their architecture. The best reflection of this ancient architecture are the forts from different eras, that still stand tall and amaze with the intricate work that has gone into giving them shape. Because the tourism in Pakistan has hit an all time low, these forts are fast disappearing from the public conscience, which is why we took it upon ourselves to introduce you to top five majestic forts and castles in Pakistan that you must visit once in your lifetime: 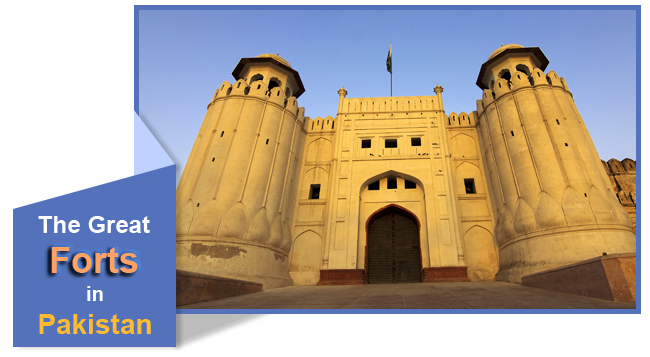 The Royal Fort in Lahore has been rebuilt and restored countless times yet it manages to retain its other-worldly charm. Located in the Old City, the fort has been ruled by all great Mughal emperors including Akbar, Jehangir, Shah Jahan and Aurangzeb at some point. Its present structure was, however, given shape by Emperor Akbar in 1566. Stunning palaces, halls and gardens decorate the fort’s premises, with Badshahi Mosque, Sheesh Mahal, Alamgiri Gate, Naulakha pavilion, and Moti Masjid being its most celebrated structures. The fort is also the site where Lahore’s most ancient remains can be found.

Resembling an Italian chateau, the Noor Mahal was built by Nawab Subah Sadiq IV, the 5th ruler of Bahawalpur State in the year 1872, when the British still ruled this part of the world. Inspired from the elements of neo-classical architecture as well as Corinthian and Islamic styles of architecture, the Noor Mahal Fort was built by the Nawab for his wife. The fort is under the jurisdiction of Pakistani army now but is open to visitors who come from far off places to see swords, old currency notes, coins as well as old furniture from Nawab’s personal belongings.

One of the biggest forts in the world yet shrouded in mysteries, Ranikot Fort in Sindh can be seen from as far as five kilometres. Boasting natural cliffs, mountains, streams, pools and valleys, all in its vicinity, the Ranikot Fort has a circumference of approximately 26 kilometres. Though, nobody knows anything about the origin of the fort, visitors are lured by the promise of spectacular landscapes, including view of another fortress in the distance, the magnificence of the Mohan Gate and myths of fairies that are associated with the fort. The ride to the fort can be a little treacherous, but it’s well-worth all the effort.

A great symbol of Muslim military architecture, the Rohtas Fort was built by Sher Shah Suri, 16km northwest of Jhelum. Though, a major part of the fort now remains in ruins, most of its 12 gates and 68 bastions have managed to survive and serve as centres of great tourist interest. One of the major highlights of the fort for tourists is the haveli of Man Singh, from where stunning views of the whole fort and surrounding areas can be enjoyed.

The Red Fort in Muzaffarabad, Kashmir makes up with its quaint beauty for what it lacks in popularity. Going through a sort of existential crisis, partly because of the neglected state it is in and partly because of the presence of more famous namesake just on the other side of the border in India, the Red Fort in Muzaffarabad is even more precious as it is struggling to survive against the ravages of time. Built by the Chak rulers of Kashmir and surrounded on three sides by the Neelum River, the fort remains largely popular for its brilliant and strategic design and architecture.

Many of the flights and flight-inclusive holidays on this website are financially protected by the ATOL scheme. But ATOL protection does not apply to all holiday and travel services listed on this website. Please ask us to confirm what protection may apply to your booking. If you do not receive an ATOL Certificate then the booking will not be ATOL protected. If you do receive an ATOL Certificate but all the parts of your trip are not listed on it, those parts will not be ATOL protected. If you have booked a flight only where the ticket is not issued immediately, your flight will be protected under our ATOL. Please see our booking conditions for information, or for more information about financial protection and the ATOL Certificate go to www.atol.org.uk/ATOLCertificate